All places where matheteuo ^3100^ is used

Matt 13:52 And He said to them, "Therefore every scribe who has become a disciple of the kingdom of heaven is like a head of a household, who brings forth out of his treasure things new and old." (NAS)
Matt 27:57 And when it was evening, there came a rich man from Arimathea, named Joseph, who himself had also become a disciple of Jesus. (NAS)
Matt 28:19 Go therefore and make disciples of all the nations, baptizing them in the name of the Father and the Son and the Holy Spirit, (NAS)
Acts 14:21 And after they had preached the gospel to that city and had made many disciples, they returned to Lystra and to Iconium and to Antioch, (NAS)

What is discipleship?
Ship (Webster) = showing, exhibiting (something that can be seen/recognized)

What then is a Disciple Maker?
One who makes disciples who show/exhibit things

This can cause the following questions to come before those wanting to be disciple makers:

1. What good habits do I want my disciple to pass on to his disciple?
2. What do I need to impart to my disciple so that he becomes an effective disciple maker?

Explanation of  Illustration
The ring of circles can be considered stages of a disciple maker’s development.  He starts out as a "new believer" and progresses through the diagram in a clockwise direction.  Recommended habits for each stage are printed inside the circles.  The habits can also be considered as objectives of the disciple maker as he seeks to develop his disciple’s abilities and maturity.
The arrows can be considered "expected abilities".  For example, a NEW BELIEVER and a GROWING CHRISTIAN have no arrows coming out of them because they are not expected to be able to reach out and help others. The DISCIPLE is expected to be able to lead people to Christ and help them to grow so that they reach the GROWING CHRISTIAN stage.   Going through the NEW BELIEVER and GROWING CHRISTIAN stages has taught the DISCIPLE much of what he needs to know.  The Laborer will help him know more and put this knowledge into action.  The LABORER is expected to be able to help someone become a DISCIPLE.  He can do this because the LABORER has been through all three previous stages and he has the council of the Leader to guide him.  Finally the LEADER develops.  He is able to do everything a LABORER can do because the LEADER has been through all previous stages and his LEADER has taught him additional things he needs to know.

The circle illustration is a plan from the heart of a man seeking to make disciples and fulfill the great commission. It has helped this man set personal goals for himself and propose personal goals for others. The reader should realize that the key to success is not in the plan but in seeking the Lord’s direction every step of the way. The author believes a good reference for coming up with a disciple making plan can be found in the book: "The lost Art of Disciple Making” by Leroy Eims.

What is a Disciple?

Disciple (Wikipedia) =The term "disciple" is derived from the Koine Greek word mathetes,[1] which means a pupil (of a teacher) or an apprentice (to a master craftsman), coming to English by way of the Latin discipulus meaning a learner while the more common English word is student. A disciple is different from an apostle, which instead means a messenger.[2][3] While a disciple is one who learns from a teacher, an apostle is one sent to deliver those teachings or a message 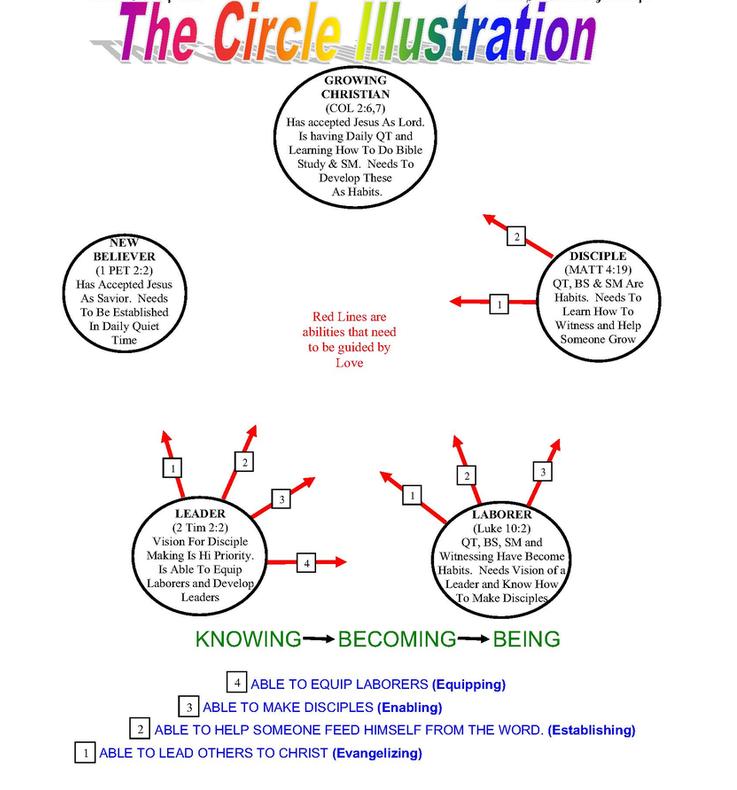 ​The Purpose of Love